News from around the country 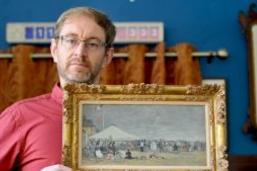 HENRY COUNTY, Ga. - The Henry County Police Department said one vendor at a McDonough flea market shot and killed another vendor during an argument on Sunday.

Police said a dispute between Favors and Williams, who were vendors with neighboring booths near the entrance to the market, escalated to gunfire.

Police are asking for witnesses to come forward and report information to the police department by calling Detective Blake Parker at 770-288-7574 or by emailing blakeparker@co.henry.ga.us

According to Sullivan County dispatch, the call came in at 12:41 a.m., and the Bluff City Volunteer Fire Department is the lead agency.

Chad Lewis, the chief of the Bluff City Volunteer Fire Department said that while the fire is being investigated, crews don’t believe the incident was suspicious.

“We did have some lightning in the area at the time, but it’s still unknown if that’s the cause,” he said.

No one was inside the building during the fire, and crews were on scene until 7 a.m.

According to a Facebook post from the East Sullivan County Fire Department, the building where the fire started was destroyed.​

News Channel 11 spoke with the building’s owner, Chad Baker, who said building 8 was completely destroyed in the flames while building 9 received damage.

Baker said that despite the loss, the flea market will be open on Sunday.

“We are going to have to see how quickly we can get the building back up for [the vendors],” Baker said. “I just met with an electrical contractor and my building contractor, so we’ll get started back quick.”

An antiques shop owner recognised that a painting bought at a flea market was once stolen from a Mayfair museum and is a rare Eugène Boudin, whose work has sold for £1.5 million.

Jon White, owner of Old Bank Antiques, said that a woman had sold him the painting with other items from her late father’s estate.

She told him her father had bought the piece, Trouville — Scène de Plage, from a London flea market several years ago.

But White, of Royal Wootton Bassett, Wiltshire, has since confirmed it is in fact a stolen painting by French artist and was last seen in an art gallery in Mayfair in May 1990.

White is now trying to discover its original owner.